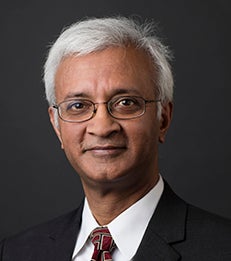 Raghu Sundaram is Dean and the Edward I. Altman Professor of Credit and Debt Markets at New York University’s Leonard N. Stern School of Business. He was appointed Dean on January 1, 2018, having previously served as Vice Dean for MBA Programs and Online Learning.

Dean Sundaram’s work in finance spans a number of areas including agency problems, executive compensation, corporate finance, derivatives pricing, and credit risk and credit derivatives. He has also published extensively in mathematical economics, decision theory, and game theory. His research has appeared in leading academic journals in finance and economics, as well as in several practitioner-oriented journals. He is the author of two books: A First Course in Optimization Theory (Cambridge University Press, 1996) and Derivatives: Principles and Practice (McGraw-Hill, 2010).

Dean Sundaram has taught courses across Stern’s Undergraduate, MBA, PhD, and Executive Education programs. Of all the awards he has received over the years, he is most proud of being the inaugural recipient of Stern’s Distinguished Teaching Award in 2007. He has a long record of service to the School and the University, including as chair of the Tenured and Tenure-track Faculty Senators Council and as a member of NYU’s Presidential Search Committee in 2014. Dean Sundaram currently serves as a member of the Academic Council of Krea University and Advisory Council of Shiv Nadar University Delhi-NCR, both in India, and the Advisory Board of the Antai College of Economics and Management, Shanghai Jiao Tong University in Beijing, China.

As Dean and Vice Dean, Dean Sundaram has led the launch of multiple new degree programs, including two one-year MBA programs, a number of specialized master’s programs, and the extension of the School’s New York City-based Executive MBA program to Washington, DC. He has overseen Stern’s entry into online education and the establishment of several new, high-profile initiatives at the intersection of entrepreneurship and technology, notably the Endless Frontier Labs. He also established the School’s first Office of Diversity and Inclusion.

An open letter to US policymakers, signed by Dean Raghu Sundaram and more than 60 b-school deans and business leaders, underscoring the importance of international mobility to the global economy is highlighted

In a trend story on business education in 2019, Dean Raghu Sundaram explains why he believes the MBA degree will continue to thrive

In a feature story on NYU Stern, 10 Class of 2020 MBA students are profiled; Dean Raghu Sundaram highlights the growth in Stern Solutions projects; and Professor and Vice Dean of MBA Programs JP Eggers cites the School's strength in technology

In a feature profile, Dean Raghu Sundaram showcases Stern's reputation in finance, technology and engagement with the business community to prepare future leaders to lead a changing business world

In an in-depth interview, Dean Raghu Sundaram shares his outlook on volatility and risk management in financial markets and the recent fraud at Punjab National Bank in India

In an interview, Dean Raghu Sundaram shares his views on financial risk management and volatility

The appointment of ​Raghu Sundaram ​as Dean ​is spotlighted

NYU Stern Announces the Establishment of the First Creative Destruction Lab in the U.S.